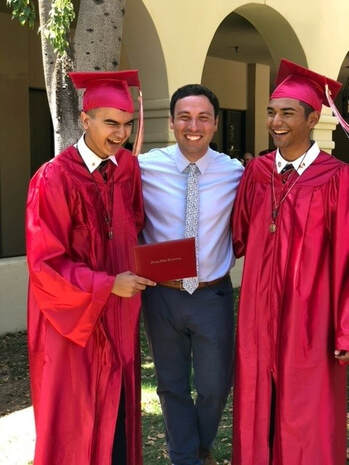 Nathan grew up in the Maryvale community. He and his sister are first generation college students, and while his parents always held high expectations for their children, they had little knowledge about navigating the college process. Nathan looked up to his older sister and her college journey, and when he walked into his 7th grade math class, he met another mentor to support him in his future endeavors.

Nathan was in Mr. Catanese’s first ever Algebra and Geometry classes at Pueblo del Sol, initially taking classes on the weekends or after school to ensure that he was on track to enroll in higher levels of math in high school and eventually major in science in college. In 2013, with support from his mom and dad and guidance and recommendations from Mr. Catanese, he applied to Brophy College Prep for high school, making him one of the first students from Pueblo to attend Brophy, and setting a precedent for other students in Maryvale. “A lot of teachers will write a recommendation, but Mr. Cat was super hands on in getting me into one of the best high schools in Arizona.”

Mr. Catanese continued to stay in touch and support Nathan and other students in that first cohort through high school.  In 2016, he launched Camp Catanese, as a way to ensure that his former students were prepared for the ACT, stayed on track in STEM courses, and had tools and resources to apply for college. Nathan, again, was one of the first ever Campers at Camp Catanese and attended the first three summers of camp.

Today, when Nathan is asked about Mr. Catanese’ influence he doesn’t start by talking about Algebra or Geometry classes, or even the hours of test prep, essay writing and reviewing. Instead, he recounts time he spent volunteering on Saturdays at St. Mary’s Food Bank with Mr. Cat and his classmates on a Saturday. Or, he thinks about a particularly special night at camp, when he and his cabin reflected on serving and uplifting one-another and were given the space to share openly and vulnerably with each other and their counselors. These memories stick out to Nathan he says, “because it was the first time I saw a teacher actively getting students to better each other and the community and he was having so much impact on futures of students, not just me.”

Nathan’s most prominent recollection from Camp Catanese is from the last night of camp when he was a senior in 2018. Mr. Cat gathered the senior campers in a huddle. The comradery around college and excitement for the future was palpable. In that circle, Mr. Catanese announced, for the first time ever, that Camp Catanese was awarding each senior camper a $1,000 college scholarship – something Nathan says took a huge weight off his shoulders, “but for other kids definitely made college possible in that moment.”

Today, Nathan is a first-generation college graduate who majored in Healthcare Compliance and Regulations at Arizona State University. He’s proud to have majored in a STEM field and is grateful for his advisors at ASU who helped him find his niche in healthcare, after a long journey of being interested in science and medicine. While Nathan plans to work in healthcare compliance in the future, he is taking the opportunity to serve his community now.

Nathan was admitted to Teach For America’s 2022 corps, and is currently teaching middle school science a few doors down from Mr. Catanese and his old math classroom at Pueblo del Sol Elementary. Nathan has worked very hard to be where he is today. Through his example, and being part of so many “firsts”, he has paved a path to demonstrate what is possible for his students, his younger cousins who look up to him, and the Maryvale community.