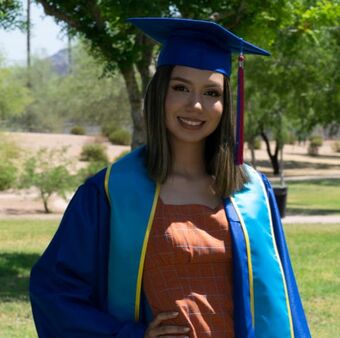 ​“The community in Camp Catanese is like no other and that is truly what has helped me and so many of my classmates go to college.”

Karla Ramos Gonzalez is the oldest sibling of four. Although she was born in the United States, she grew up living between a small rural town in Jalisco, Mexico and Phoenix, Arizona. Her parents are both from Mexico, where her father only completed middle school and her mother finished high school.

When she was eleven, her family moved back to Phoenix permanently. She started 5th grade in the Isaac School District and attended Alta E Butler Elementary School. From there, she went to Morris K. Udall Middle School and then enrolled at North High School in their International Baccalaureate Program. She had known of Mr. Cat since 8th grade from a student college fair. At that time, they were introduced and she was invited to Camp Catanese but was unfortunately unable to attend.

She was re-introduced to Mr. Cat about a year later through some of her first high school friends. She first attended Camp Catanese in the summer after 9th grade, and the rest is history. She went on to attend three Camp Catanese summer sessions, one winter session, and the first-ever Alumni College Conference.

“Mr. Cat has welcomed me and my entire family with open arms. Even though I never had him as my formal teacher, he considers me his adopted student. He is an amazing teacher with a big heart. Unlike others, he truly believes in giving his students the opportunity to dream big, because he knows we can succeed and attain a higher education despite our backgrounds. As a first-generation low-income student from a community with students like me, I know first-hand what it's like to lack the resources we need to achieve a better education. Through Camp Catanese, Mr. Cat gathers a group of amazing people that become our family and mentors for a lifetime. With standardized test prep, financial aid workshops, and career fairs, the people at camp are ready to help us tackle every new stage in our academic careers. The community in Camp Catanese is like no other and that is truly what has helped me and so many of my classmates go to college.”

Karla’s family, especially her siblings, made a huge impact on her journey to college. She describes her sisters as her greatest inspiration. She hopes that by being the first in her family to earn a college degree she can pave the way for all of her siblings and for other students in her community to go to college. She especially hopes to inspire young girls to pursue their dreams. Her parents have also been a huge support in her decision to study out of state at Yale University.

Karla is currently in her second year at Yale University majoring in Architecture in the Design concentration. She also plans on earning a certificate in Computer Science. Her experience so far has been very exciting. She is involved in the Ballet Folklorico Mexicano de Yale and participated in their fall showcase. She says performing with this group was “an amazing experience” and made her feel “at home and connected” with her culture. So far she enjoys her architecture classes and looks forward to doing more hands-on learning.
​
In closing, Karla says, “I would like to thank the Camp Catanese family and all of the people in my life that helped me get to the position I am in today; I couldn't have done it without them!"